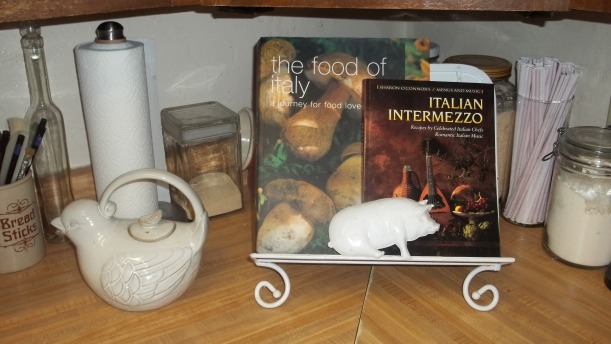 Obviously I love to cook. But I hardly ever follow recipes. Maybe it’s just a streak of rebelliousness. Or maybe it’s a matter of taste – like when I read “2 cloves of garlic” I know that’s not enough, so I toss in 6….and I think Mozzarella cheese is much tastier than Monterey Jack. Or it might just be be because I’m cheap and lazy – I make a lot of substitutions in order to avoid a trip to the grocery store.

So I was standing in my kitchen a few weeks ago admiring these two beautiful cookbooks I have decorating my counter.  Italian Intermezzo and The Food of Italy: A Journey for food Lovers. They are beautiful books, but I’ve never used either of them. I picked up Italian Intermezzo and began to thumb through the pages. “Recipes by Celebrated Italian Chefs.” Some of those recipes looked really hard and complicated. Way more work than I usually do when I make a meal.

But I was intrigued and challenged! Intermezzo means intermission. An Italian Intermission – A journey through Italy with food.  It occurred to me that it would be fun to try to work my way through the cookbooks and actually follow the recipes. It would be educational like a home-school cooking class.

David and Amanda come over for dinner every Wednesday evening so I told them my plan. A virtual food tour of Italy. My daughter-in-law teased me about channeling Julie and Julia. Maybe I am; I loved that movie. But I didn’t plan to write blog posts about our culinary adventure. I just wanted to learn some new techniques and try some new tastes.  You know how you get into that rut with the same ten or twelve boring meals? That’s kind of where I was.

So every week now I set the table with nice china and make it all as elegant as I can, and we have a new experience in Italian cuisine.  We never know what to expect and we’re tasting all kinds of things we never planned on. 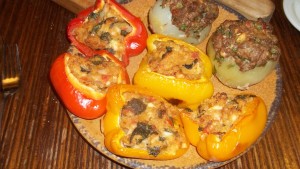 The first week I made stuffed capiscums and stuffed onions. Yes, stuffed onions. And they were as gross as you might think – slimy and hard to work with, and not very tasty into the bargain. On the other hand, I made a margin note in the cookbook that Stuffed Capsicums are delicious. We’ll be making that recipe again. Capiscums are bell peppers. I didn’t know that. I’ve made stuffed bell peppers dozens of times, but this was a completely new taste and technique; stuffed with bread crumbs, cheese and mushrooms instead of ground beef.

The second week we had la ribollita, a Tuscan soup. Ribollita means reboiled. It’s called that because it’s best if it’s made the day before and then reheated. That cracks me up! La ribollita sounds so romantic and exotic.  (I guess I could say most of the soups I make are ribollita because I usually make a huge pot of soup and there are always leftovers.) 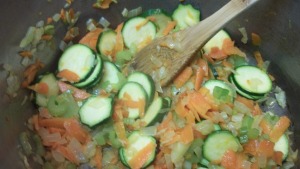 I also made polenta for the first time in my life. John has never been a fan of anything with cornmeal, so I have never bothered. This polenta with wild mushrooms changed his opinion on that matter. It was a home run!

The third week was the strangest yet. Minestrone and artichoke frittata both called for big flat borlotti beans that were supposed to be peeled. That’s another thing I have never done in my life – peeled beans. 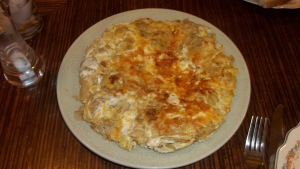 I brought the dried beans to a boil and the skins puffed up and I let them cool. The skins slipped off pretty easily then, as I picked them up one at a time. So I multi-tasked. I peeled beans as I stood by the stove broiling layers of eggplant for the eggplant salad.

And all kinds of flavors I never thought of putting together.  Some time ago I wrote a post about my own olive tapenade, which everyone loves. But The Food of Italy has a tapenade recipe with capers and a whole can of anchovies.  I followed it and it was pretty tasty, but we decide my own old standby is much better. And cheaper. 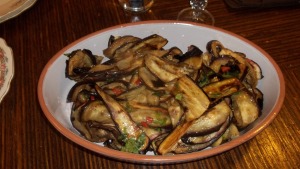 But the charbroiled eggplant salad was amazing. I also got that recipe from The Food of Italy. And everyone agreed that mine looked just like the picture in the book. Hooray!

We’re all getting into it. In fact John is in the kitchen right now looking at Italian Intermezzo. He has his eye on a recipe for Gelato al Caffé from Chef Catherine Whims. It’s served at Genoa Restaurant in Portland.

And this week in will be created by Chef John Paladini, and served right here in our own little Italy.

I’ll tell you about it next week.