Now the fun really begins! My grandkids move into the stage of learning to read, and count, and recognize numbers. They’re beginning to understand how to reason and strategize. Babies are sweet and cute, but this is the golden age of Grandeehood!

Candyland has given way to tic-tac-toe and checkers, and lately we’ve been having the most fun with some dice and a couple of decks of cards…

Dice and cards! Is Grandee teaching the kiddos to gamble? Not at all. It’s more like a GAMBOL. They love it! The first thing they say when they burst through the door is, “Can we play with cards?” They run to get them from the shelf, and the fun is on!

The first game I taught them was “Dice and Cards”.

Here’s how you play:

Remove all the cards out of the deck except A-6. These 24 cards are the ones you will play with.

Deal 6 cards to each player. The player will place them FACE UP on the table. 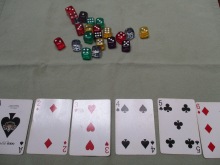 Take turns rolling a die and when you roll a number that is showing on one of your cards you get to turn that card upside down.

The first person to turn over all of their cards is the winner. 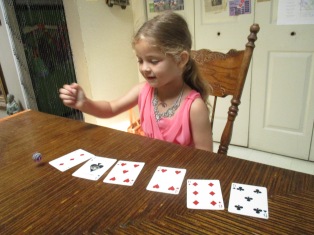 I have a jar of brightly colored dice so everyone chooses their favorite color. The kids quickly learned to recognize number patterns on the dice, and this game helps reinforce what the numerals look like. I did have to explain that we’re using an ace for number one. Even 3-year-old Caleb can play this game with very little help.

The other game is “Count to Ten”.  Our older kids learned it pretty quickly, but it’s challenging enough that adults can enjoy it too. I used to play for hours with my mom and her friends at her senior living place.

Here’s how to play.

Deal out 10 cards to each player. FACE DOWN. Do not look at the cards. Place the cards in two rows. The top row will be for cards from 1-5 and the lower row will be 6-10. 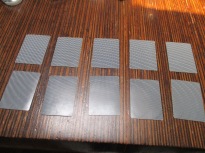 After we have placed our cards in two rows we usually count to 10, touching each card as we go, starting at the top row left and finishing at the bottom right.

The remaining cards are put in a stack in the middle of the table with a “discard” facing up.

The object of the game is to have 10 cards placed in numerical order from 1 to 10. The player who counts to 10 with his cards first is the winner. 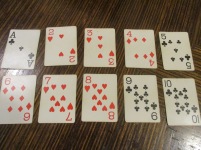 The game begins with the player to the left of the dealer drawing a card from the center pile or from the discard stack. If it is a number card, he can put it in the corresponding number place in front of him, replacing the upside down card.

Then he looks at the card which had been upside down, which he just replaced. If it is a number card, he can put it in its proper place in his rows. His turn continues until he picks up a card he can’t use. He then discards it and the next player draws.

Queens and Jacks have no value. Kings are “wild” when adults play, but I have not yet introduced the “wild” concept to the kids.

So you can imagine how aggravating it is to draw a face card, or a card that has already been turned over in your hand. And how really aggravating it is when you are forced to discard the exact card the next player needs.

The person who has all of his cards turned face up, counting to 10 is the winner. 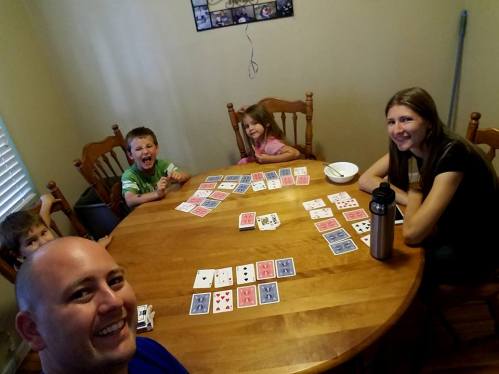 David is on his second hand with only 9 cards in front of him.

That is as far as I’ve gone with our grandkids – one game at a time. But when we play with adults it gets a little more complicated. The game I have described would only be the first hand. In the second hand, that winner is dealt only 9 cards. And if he wins, he would only get 8 cards in the next hand. And so on.  Each time a person “goes out” or turns all of his cards over he is dealt one fewer in the next hand. Until one person is only dealt 1 card and is able to turn it over to be an ace or a 1. Recently the kids played it with their parents and played the longer version with the diminishing number of cards.

It has taken me much longer to describe these games than it would have taken to play them. I’m looking forward to hours of card games this summer. It’s good on so many levels – sharpening math skills and thinking skills and especially the practice of good sportsmanship.