Why do I keep a box of food coloring in our bathroom medicine cabinet? My grandkids, (and their parents before them) love it when I plop a couple of drops into their bathtub and they get to swirl the colors around.

So a few months ago my grandkids and I took this water coloring a step further. I got three glasses of water and let them drop colors in, and stir.

We made a glass of red, a glass of blue and a glass of yellow. Then I let them pour certain colors together into other glasses to make green, purple and orange.

They seriously thought it was magic!

And then last week we made a “rainbow” on a plate. We placed Skittles all around the edge of a flat white plate and poured enough water to just touch the candy – then we watched the colors mingle and cover the plate. Again they were delighted!

So just thinking of how much fun we’ve been having with colors I thought about making a jello rainbow. It took several hours, but it was fun for all of us.

This is how we did it:

3 clear containers, straight-sided to make and serve the rainbow in.

7 glasses to mix the rainbow colors of liquid jello.

I put the Jello powder into ziplock bags so I could cut off the corner and the kids could pour slowly and carefully, with less mess.

Caleb, our youngest grandson, is two. I jokingly call him “Me Too” because that is his current favourite phrase. He wants to be in on everything his big brother and sister are doing.

It was a little nerve-racking to have a two-year-old stirring jello into boiling water. That’s why I chose a four-cup measuring cup for the one cup of hot water. Less chance of splashing.

Caleb poured yellow Jello from the cut corner of his ziplock bag, and stirred it with a plastic chop stick. Nathan chose red and Audrey chose blue.

So we had three big measuring cups, each with one cup of liquid jello.

After the jello was dissolved they each added a cup of cold water.

So we ended up with 6 cups of liquid Jello in three containers. Primary colors – red, yellow and blue.

I reminded them of how we had mixed the colored water a couple of weeks ago to make new colors. And then we looked at a book about rainbows to see how many colors there are, and what order they are in.

The seven are, of course, red, orange, yellow, green, blue, indigo and violet. 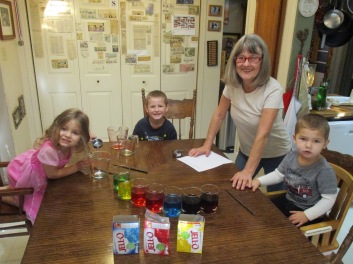 We got seven drinking glasses and mixed and stirred, and stirred and mixed a quarter cup at a time. We had quite a discussion about the difference between indigo and violet. Purple was easy: blue mixed with red. Finally we decided that indigo is bluish purple and violet is reddish purple. Not very scientific, but it worked for the under-six crowd. And it worked for Grandee.

I had found three heavy glass containers at the dollar store. (Don’t you love the dollar store!?) I think they are actually candle holders, but they worked great for our purpose. They hold about 2 cups each, and are heavy enough that they probably wouldn’t break if little hands dropped them. What I liked best is that the sides are straight up, so the colors would be evenly distributed.

First came red. I used the quarter cup measure and let each of the kids pour it into the bottom of their glass container. Then we put them into the fridge for half an hour to set. We left the remaining six glasses of liquid jello on the counter so they would stay liquid. 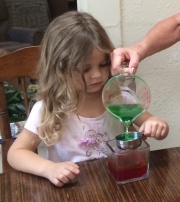 I set a timer and we went about our day. Each time the timer rang, we came into the kitchen to add the next color to the rainbows. We added about ¼ cup of new color each time, in rainbow order.

At room temperature the added jello didn’t melt the jello that had already set in the dishes. It just made a nice flat layer. As the day went on the refrigerated jello set up more quickly, so the progress went faster. By the time we got to the purples, the new layer was setting in 15 minutes.

The kids were so excited to show their parents, and then to take them home for dessert.

Golden memories at the end of the rainbow!