Oscar Swan was an investment banker in Chicago at the turn of the century. He and his family enjoyed a lavish lifestyle, which included a gracious country home, built in 1902. Mr. and Mrs. Swan, along with their little daughter, Betty Jean, often escaped the oppressive heat and humidity of the city, and spent long weeks at this country home about 50 miles west of Chicago. Betty Jean enjoyed the county life so much that eventually her parents decided to leave Chicago, and make Geneva their permanent home.

John and I had the opportunity to spend five days with the Swans recently – or at least with their memories. The Swan home is now The Oscar Swan Country Inn on State Street in Geneva.

It’s a surprising little patch of country right on the busy highway next to a strip mall…dry cleaners, nail salons, and restaurants. “Drive slow after you pass Walgreen’s,” our friend had warned us, “or you’ll miss it!” And we almost did. After the strip mall we came to an area of grass and woods which thickened to almost a wall of greenery. Then it gave way to a long tree tunnel, marked by a small sign, a profusion of orange daylilies, and a lamp post.

I felt like we were traveling back through time. The gravel driveway with its white board fence opened to some of the loveliest grounds I have ever seen. And the house looked like something out of Downton Abbey or an Austen novel.

I know my mouth was hanging open as we wandered through the big house to find our room that first night. I quickly modified my mental assessment of the house. Inside, it was not so much like Downton Abbey, as it was like Bleakhouse. Charles Dickens could have been describing The Oscar Swan Inn when he said, “It was one of those delightfully irregular houses where you go up and down steps out of one room into another, and where you come upon more rooms when you think you have seen all there are, and where there is a bountiful provision

of little halls and passages, and where you find still older cottage rooms in unexpected places with lattice windows and green growth pressing through them. Mine, which we entered first, was of this kind, with an up-and-down roof that had more corners in it than I ever counted afterwards.”

As for John and me, our room was actually a suite – “The Twin Room Suite” according to the brass plate on the door. We followed a little passageway off the main hall, made a sharp turn, went down three steps, and came to the door of our sitting room.

We later discovered that if we turned right instead of left at the sitting room door, we would come to a flight of stairs leading to the kitchen. It made us wonder if The Twin Room Suite had been the servants’ quarters back in the days of the Swan family. What fun!

But our quarters could not have been more unservantlike! Elegant chairs, a writing desk, and a credenza with a few books and a slim understated TV. (Which we did not touch – too much else to see!)

Across the sitting room was another short hall. Turn to the left and there was a door to an exterior walkway that went along the roofline of the house, 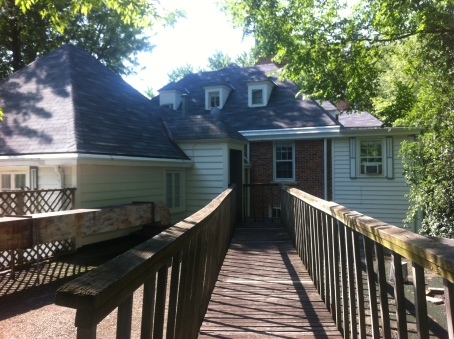 and took us to an outside staircase going down to the back lawns. Turn to the right and there were two beautiful bedrooms, and a lovely old bathroom with a wonderfully deep tub. 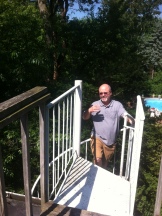 I felt like I was in the best antique shop ever! The place was filled (not cluttered) with cute, beautiful and interesting pictures, knick-knacks and lamps – all so comfortable and touchable!

Although everything I have described was old and antique-y, there were a few exceptions. Our suite had its own air conditioning control; so the weather was lovely when we came in from the ninety-five degrees of heat, and fifty per cent humidity that made the grounds flourish like a greenhouse. And there was nothing old and antique-y about the linens. They were glorious! The sheets were many thread count and wonderfully crisp and clean, the beds were soft but firm, and every day brought a new supply of fresh thick white towels.

We met Nina, the landlady when we went downstairs the first morning. She reminded us of Julia Child, and not only because every breakfast she served was fabulous. She was big and loud and friendly, and had that way

of making you feel like you, of all her guests, were somehow special. Each time we came home from one of our excursions she would call out a greeting from the kitchen. Without being pushy she would ask about our day, inviting us to pause and chat for a moment. 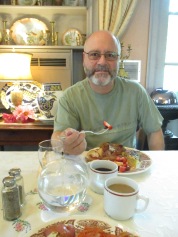 After breakfast that first morning, (a lovely and beautifully presented feast) Nina invited us to wander around the house and look in all the guest rooms since there were no other quests at the moment. I was thrilled about that since I had furtively been peeking into the empty rooms, wishing for a longer look. And it’s a good thing we took her up on her offer that morning, because that was, I think, the only moment The Oscar Swan was empty.

Nina gave the illusion of being a bit scattered and absent minded, but over the course of our stay we saw just how sensible and capable she is. While we were staying there we watched her expertly juggle two large weddings, a “Mystery Dinner” a lunch meeting of “The OK Croquet Club”, as well as being very attentive to her “regular” house guests.

So, at Nina’s invitation, we spent the next hour wandering through all the guest rooms of the wonderful old house. It was like a delightful interactive museum.

At home in Modesto we enjoy visiting The McHenry Mansion, a grand old house about the same size and age as The Oscar Swan. But at the McHenry Mansion the rooms are cordoned off and you dare not touch a thing. 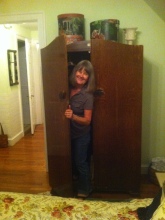 Here we reveled in touching. Each room is labeled with a small brass name plate: The Oscar Swan Room, The Betty Jean Swan Room, Oscar and Jessie Swan’s Bedroom, etc. This link will take you to the web site, where you can see more details of the Inn and rooms.

I mentioned how this rambling 6,000 foot house made me think of Dickens’ Bleakhouse. Well, the literary allusions didn’t stop there. The second morning of our stay I looked out the window and was transported to Daphne DuMaurier’s Manderly, where that grand estate was preparing for the mid-summer gala party. In this case The Oscar Swan was preparing for a gala wedding with about 200 guests – gardeners sweeping walks and the setting up of the great tent – although I could watch the preparations from any distance I chose, I still felt like Nina’s special pampered houseguest. 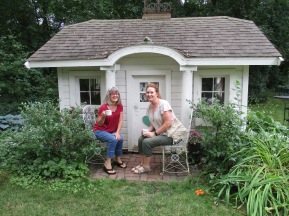 Still another literary allusion was in store for us. Tramping over the eight acres of lush lawns and gardens a few days later, we discovered Betty Jean’s little playhouse. It was pretty much modeled after the big house. (No wonder Betty Jean talked her parents into abandoning Chicago and moving to the country!) My friend and I ducked our heads and stepped through the little doorway, back 100 years into any little girl’s paradise!

Wall paper and small antique furniture, and sweetest of all, a fireplace with roses for flames like the fireplace in George MacDonald’s Princess and the Goblin.

John and I had just about decided that we don’t really care for “Bed and Breakfasts” because when we have a chance to get away, we want to be left alone and not have to make small talk with strangers. This trip may have changed that. There was lots to see in Geneva and the Chicago area, but we could have happily spent every moment of our time right there on the grounds of The Oscar Swan Inn. We were alone as much as we wanted to be, but thoroughly engaged with history and conversation when we felt like it, and relaxed and pampered every moment of our stay.