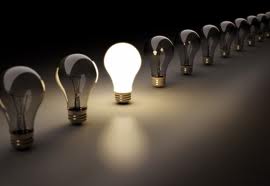 It seemed like the apocalypse without the zombies as I walked into the house. It was filled with an other-worldly kind of light. Andee greeted me with an “I have no idea what went wrong, but nothing seems right.” kind of look on her face. The ballasts were humming and the lights were at half-mast. The GFIs were buzzing and the computers were turning themselves off and then on again. The refrigerator and freezer stopped running and the only sign of life was the dim half glow of the bulb inside.

I made my way to the breaker box, but was surprised to find no tripped breakers. When I unplugged the freezer, the light in the garage went from dim to bright. When I plugged the refrigerator into a standard outlet, the lights in the kitchen dimmed. The electricity was not behaving in a way I had ever known it to behave before.

Andee put the word out to pray.

Huge thanks for the help from my son Matt and my friends Roy, Rick and Kyle, all electricians who talked me off the ledge and walked me through testing circuit after circuit. I was getting wild swings on the meter readings which made it impossible to diagnose the problem, let alone find a solution.

Finally Rick called me and said “I’m coming over.” He set to work tightening connections while listening as I described the symptoms. Finally he said “Nothing with a motor works. You must have had a power spike and MID (our power company) would have a record of it.”

I called MID and they sent a very capable technician who concluded that a power line had broken somewhere between the pole and where it connected to the house. He called a crew who converged on the place like a swat team. By 3:30 in the morning our lights were back on and everything was normal again, with the exception of two surge protectors that had fried so the computers they were protecting could live.

We’re feeling very blessed to have our house running normally again; but even more for the prayers and help of our friends and family. Thank you. 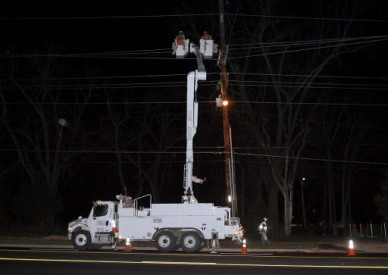 John wrote this as a sort of debriefing, journaling piece, the day after our electrical adventure. I call it an adventure now, but at the time it was a pretty scary trial. We didn’t know if we’d be buying new appliances the next day, or having our whole house rewired. Or burned down.

In 30 years of marriage I have never seen my husband so flummoxed. John is very smart. He always rises to the challenge and knows how to figure things out. But in this case I saw him completely at a loss, even with the telephone support of three expert journeyman electricians! Over and over, our son Matthew lamented the 300 miles that separate us. “This is crazy,” he said, “Those readings can’t be right!” But there they were.

We are so thankful that our friend Rick urged us to call the power company.

It didn’t take them long to discover that the problem was not in our house. The line to the power pole had a break in it.

And we know it isn’t good to have a broken connection to the source of power.

I was pondering it the next day:

The light was weak and shaky.
None of the appliances could do their job.
And there was that awful smell.

What a great spiritual lesson. When I am not connected to The Power Source my light is weak and shaky.
I am not able to do my jobs well.
And frankly, I’m pretty stinky!

Thanks to my husband John, for inspiring this blog – and writing most of it!

(You can read John’s blog – Marriage Feast –  by clicking here.)