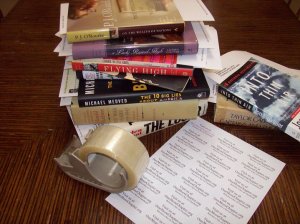 I have thousands of books for sale at One More Chapter, and although I’m the quintessential bookworm, I obviously haven’t read most of them. So I’m always excited when I sell a book I have particularly enjoyed.

That happened in 2008 when Jonna ordered “The House on the Strand” by Daphne DuMaurier.

As I packed her order I included a gushing little sentence or two. “I loved this book! I am so excited to connect with another Daphne DuMaurier fan!”

What fun it was to get a reply from Jonna a couple of weeks later! She said “I had a Helene Hanff moment when I received your note.”

As a bookseller, I was dizzy with delight!

Helene Hanff was an American woman who ordered a book in 1949 from Marks & Co, a bookseller at 84 Charing Cross Road in London.  A 20 year pen pal friendship developed between Helene and the bookstore manager, Frank Doel, along with other staff members of the book store. They exchanged chatty letters, Christmas presents and birthday wishes. Helene even sent food parcels to help her friends through the food shortages that occurred as a result of WWII. 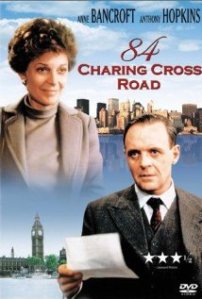 Helene Hanff tells the story in “The Dutchess of Bloomsbury Street” and it is wonderfully retold in the movie, “84 Charing Cross Road”, starring Anthony Hopkins and Anne Bancroft.

As a bookseller I do get repeat customers from time to time, and they sometimes include personal comments.

I have communicated with a woman in Scotland who lives a few streets away from where my mother grew up and knows members of my mom’s family.

And I have sporadic communication with Father Eugene, a nice Catholic Priest, who ordered a book from me, and then found this blog and continued our communication.

But best, and most consistent of all, has been my long distance friendship with Jonna. It’s not a trans-Atlantic affair like Helene Hanff had with the staff of Marks & Co, but she does live quite a distance from this western edge of the United States.

For six years Jonna and I have exchanged notes and cards. I mourned with her when her beloved dog passed away, prayed for her when she embarked on a big career change, and I rejoiced with her when she actually got the chance to travel to England and see 84 Charing Cross Road. 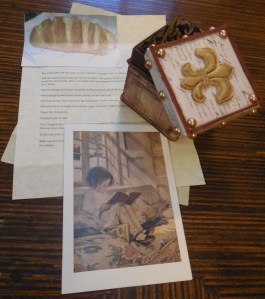 Recently I received a brown paper package tied up in string. It was a lovely little box my friend had created for me, along with a beautiful card and a recipe for a new kind of bread she had tried. It made my heart sing! I wondered that she could know my tastes and likes well enough to put together such a perfectly unique and personalized gift.

Since then, we have found one another on Facebook and become friends in this new way. Part of me is kind of sad. You know how I sometimes scream about the changes technology has brought about. (Although I can’t scream too loud since I’m writing a BLOG post.)

But I’m looking forward to seeing pictures of Jonna and her new husband, and new job. Seeing the things she “likes” and “posts” on FB.  But I am also looking forward to stamping a letter and posting it from an old fashioned mail box, or putting some cookies in a box and sending them her way.

It’s a Helene Hanff kind of a thing.

Like a good Irishman, he passed away on Saint Paddy’s day.

My dad liked to brag about the fact that he quit “cold turkey” and hadn’t had a cigarette in 40 years.  But he did everything else he could to abuse his body.  Bacon, eggs and fried potatoes every morning of his adult life. And way too much hard drinking. After successful heart surgery in January, dad’s body began to shut down. He spent the next six weeks in the hospital where he died.

When we knew he was close to dying, all of the siblings gathered from Mississippi, Texas, and California.  We stood around dad’s bed, holding his hands and having one of those sad unexpected family reunions. We all cried by turns, but mostly we laughed as the pictures tumbled through our collective memories.

He died early the next morning.

I’m the eldest of seven kids, and for most of my childhood we lived out in the country near Cincinnati, Ohio. My parents bought an old farm house on five acres of woods.  It was our “glass castle”.  With input from all of us, dad drew up detailed blueprints to convert the dilapidated place into our dream house. It had all kinds of clever little architectural whims and fancies.  It had innovative features far ahead of their time.  I remember feeling so proud when dad would show visitors the latest project, and they would always shake their head in amazed appreciation.

We lived in the house as dad tore down walls and rebuilt the place room by room.  Some parts of it were finished with incredible detail…an aquarium built into the wall… Some parts remained ramshackle. “Remember that time the roof started leaking above the bed?”

Black plastic sheeting was the outer wall of the living room for months…  “Remember the time the neighbor’s pig came through the black plastic into our living room?”

We lived in a state of construction for years, but we knew that house was going to be amazing when it was finished!  But it never was finished. So many things were never finished. Dad always struggled with drinking.

He was a brilliant man, a millwright who could engineer plans for any kind of machine to do anything.  He was a whiz at mathematics, and artist with oil paint – his mural of a Chinese garden scene covered one dining room wall, while other walls of the room were raw sheetrock.

Years later, all of this was reflected in dad’s workshop.  Orderly rows of baby food jars filled with nuts, bolts and screws. Three-pound coffee cans lined the shelves, neatly painted and labeled with dad’s clicking tape label maker. And unfinished projects were everywhere.

Clever, artistic, and a little quirky.

After dad died we gravitated to his workshop and the reminiscing continued. My brothers pulled out little drawers and poked into cubby holes. They laughed and cried. Dad was one of a kind.

Later that afternoon, my brothers came home frustrated after their appointment with the funeral director. Dad had specified that he wanted to be cremated, but they didn’t like any of the urns the mortuary offered. “They were all too fancy. Dad wouldn’t have liked any of them! They just weren’t him.”

Then one of them glanced up at the shelf of painted coffee cans.  “We ought to get a coffee can and paint it and just put him up here on the shelf.”

I think he was joking but we all jumped on the idea.  Dad would have loved it.

In something like a pilgrimage, my brother Brian went out and bought a new can of Folger’s coffee. I can still see him wiping out the coffee residue with almost sacramental reverence.

They painted it with dad’s green paint, and labeled it with his name – Art.

Dad was honored at his memorial service with all the honor due a Korean war veteran. We had a family flag ceremony in his front yard. My brother played taps on dad’s harmonica as my nephews brought the flag to half-mast. And Art’s

coffee can was placed on the shelf in his workshop.

Nine years have passed. The workshop looks pretty much the same as it did when dad died, but it’s not a shrine. We always go out and “visit dad” when we visit my mom. The boys go out there and tinker around, making and fixing things with dad’s tools. Sometimes I go out and look at his books and papers and maps.  For all of us, the years have burnished the edges of hard, uncomfortable memories, and only sweetness remains.