All of the above!

The island of Stromboli has a population of about 600 people, and an active volcano which has erupted many times. In fact it has been nicknamed “the lighthouse of the Mediterranean” because the frequent eruptions cause the peak of the volcano to glow 3,000 feet above sea level.

In 1950 Roberto Rossellini directed, Stromboli, a movie about Karen, a young Lithuanian woman who married an Italian fisherman and went to live with him in the shadow of the volcano on Stromboli.

And after seeing the movie, the owner of Romano’s Italian Restaurant, in Essington PA, (near Philadelphia) came up with a unique new idea for an Italian sandwich, and named it after the movie.

Over the last 60 years since the Stromboli first appeared at Romano’s, it has become a classic Italian-American favorite. Since the Romano family vows that they will never share their original recipe, the sandwich has taken on all kinds of shapes and flavors.  Here’s the Paladini version of Stromboli with chicken and pesto.

Prepare bread dough, and cut it into 8 sections. Set it aside to rest.

Saute the chicken till it’s lightly browned. Add onion, bell pepper and mushrooms. Saute until they are just tender.

Add the pesto and mix well.

Allow the filling to cool to a little warmer than room temperature.

Roll out first section of dough on a floured surface. 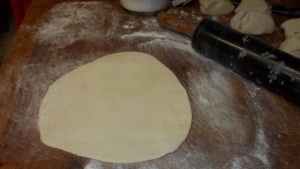 It should be about 8″ in diameter.

Place 1/8 of the filling in the center of dough, and top with 1/8 of the mozzarella cheese. 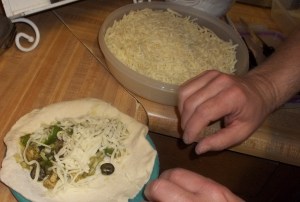 Fold, edges over, tucking in and pressing to seal.

Do the same with the remaining 7  sections of dough, then place them on two parchment paper lined baking sheets.

Let them rest for 30 minutes, so the dough will begin to rise. Meanwhile preheat oven to 400°

Bake for about 20 minutes, or until browned.

(*You can also make these stromboli to freeze for later.  Bake them at a lower temperature – about 350°  – and do not let them brown. Allow them to cool completely, and then wrap them well.  The frozen stromboli can be placed in 400° oven and baked till well browned.) 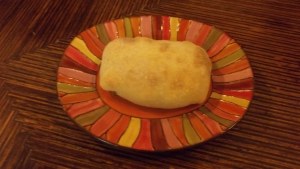 And you thought Stromboli was just the villain from Pinocchio!