This year David asked for the same birthday dinner he asks for every year – burritos, pizza, potpie and fried chicken.  Yes, as usual he wanted them all, but he finally settled on fried chicken.

There used to be a commercial on TV where they fried chicken in some specific shortening or oil. Then at the end of the commercial they poured the used fat back into a measuring cup and claimed that “…it all came back except one tablespoon!”

Only one tablespoon had been used to fry up that whole platter of fried chicken. Right.

Well, there’s no way anyone can claim this is a low-fat meal, but a couple of times a year I’m thrilled to have a good excuse to cook something that is blatantly unhealthy,  but better than “finger lickin’ good!”

12 nice plump chicken thighs with the bones and skin.

You will also need a black cast iron frying pan and a large bowl.

Be sure to wear an apron because it does splatter.

Dissolve 1/2 cup salt in a little warm water in a big bowl.

Remove chicken thighs from the ice water and pat so they are fairly dry. Coat with the flour mixture.

Pile the breaded thighs on a plate and begin to heat oil in a cast iron skillet.

Let the oil heat until it’s hot enough to sizzle when you sprinkle flour into it.

Dredge each thigh in the flour mixture once again, and put it into the skillet.

Leave room between them so they are not touching.

I use two frying pans for 12 thighs so they’ll all be done at the same time. 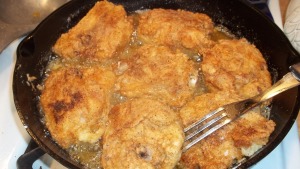 Lower the heat, cover the pan, and cook for about 18-20 minutes.

Return heat back to high and remove the lid.

After 3 or 4 minutes turn the pieces so the other side will get crisp with the high heat.

Chicken will be crispy on the outside and moist and tender inside!

Remove and drain on paper towels.