I was in the lobby of the Salvation Army filling out a form to be a volunteer bell-ringer. I had only been there about two minutes, and already three people had come in asking for some kind of help. More than a person a minute – I wondered if that pace continued all day.

One thing is for sure: the Salvation Army helps a lot of people.

For the last four years I have taken one single day of the busy Christmas Season to stand outside Walmart with a Red Kettle.  I love it. I meet so many people, and most of them are friendly and want to stand and chat for a few minutes. And always, near the end of my shift, the kettle is so full that I have to poke a pen or something into the slot to push down the bills, and make room for more.

It’s so wonderful – almost everyone puts money in! The comment I hear over and over is “This organization does so much good!”  I agree. And I’m proud to take a small part in their good work.

This year I decided to do a little digging into how it all began.

I looked up The Red Kettle History  and this is what I learned.

In the winter of 1891, Salvation Army Captain, Joseph McFee was distraught because so many poor people in San Francisco were going hungry. He resolved to provide a free Christmas dinner for those hungry, destitute people.

The only problem was how to fund that huge undertaking. Where would the money come from? Captain McFee lay awake worrying, thinking, and praying. Where could he find funds? As he pondered the issue, his thoughts drifted back to his sailor days in Liverpool, England. He remembered how, at Stage Landing, where the boats came in, there was a large, iron kettle called “Simpson’s Pot” into which passers-by tossed a coin or two to help the poor.

The next day Captain McFee placed a similar pot at the Oakland Ferry Landing at the foot of Market   Street. Beside the pot, he placed a sign that read, “Keep the Pot Boiling.” Soon he had the money to fund that first Christmas dinner for 1,000 people.

Six years later, the kettle idea had spread from the west coast to the Boston area. The combined effort nationwide resulted in 150,000 Christmas dinners for the needy. In 1901, kettle contributions in New York City provided funds for the first mammoth sit-down dinner in MadisonSquareGarden, a custom that continued for many years.

Captain McFee’s kettle idea launched a tradition that has spread not only throughout the United   States, but all across the world. Everywhere, public contributions to Salvation Army kettles enable the organization to continue its year-round efforts at helping those who would otherwise be forgotten.

Today in the United States, The Salvation Army assists more than four-and-a-half million people during a typical Thanksgiving and Christmas Season. This year, because of Hurricane Sandy, there will be an even greater need for warm clothing, hot meals and water. In New York City alone, The Salvation Army has already provided more than 160,000 liters of water, and distributed over 860,000 meals to approximately 200,000 local residents.

Yes, those people are so right when they put money in my kettle and say, “This organization does so much good!

While I was at the Salvation Army office I was able to grab a few minutes from Dan Glaeser, the very busy Christmas Kettle coordinator here in Modesto. I had been curious about the fact that the Salvation Army uses paid workers as well as volunteers. Wouldn’t it make more sense to have all volunteers? I wondered. Dan explained that forty or fifty years ago there were lots of volunteer bell ringers, but now with dual income families and single parent families there are not as many people with time to volunteer.

Of course, there is a premium on volunteer bell-ringers, but there’s something to be said for hiring paid workers too.  Dan said he thinks of it, in part, as job training.  He told me a story of a woman who was new in town. She was recently widowed and had been out of the work force for years.  She didn’t have much confidence, and she really didn’t know where to start. Dan gave her a job for the whole month of December. He said about four days before the end of the month she came to him and apologized because she didn’t want to leave him in the lurch, but she had applied for a job at McDonalds and been hired! She was ecstatic, and so was Dan.  About eight months later Dan said he happened to go into the McDonalds where the woman worked. She recognized him, and happily told him she had been promoted to assistant manager. She was thankful to Dan and the Salvation Army for helping her gain the confidence to enter the work force.

Dan said he treats his paid staff the same way employees would be treated in “the real world”. It’s not just a chance for people to pick up a little extra cash for Christmas. It’s usually people who are out of work, and he expects them to prove that they are employable and professional. If he hired a bell ringer and they did a great job he said he wouldn’t hesitate to give them a job referral.

John and I were at Hobby Lobby on Friday and we stopped and chatted for a few minutes with Paul, who was manning the first kettle we saw this year.  Paul told us he is a paid worker, who has been ringing a bell for 11 years. I told him I was going to write this article and I asked him to tell me his most interesting story. He said his kettle was stolen a few years ago. (Grinch alert!) He was heartsick.  The story was on the news – and lo and behold! – a few days later someone sent the Salvation Army check for $500 to make up the stolen funds!

Peace on earth – goodwill toward men!

Sometimes I tend to be a little outspoken in my belief that the government is too involved in the business of alms-giving. 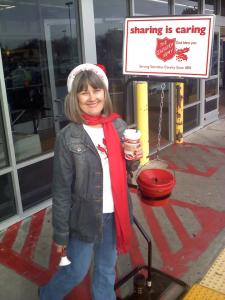 I maintain that, for the most part, people should take care of each other through personal means, churches, and faith-based organizations. So I guess the busy holiday season is the time to put my money where my mouth is.

There is never a time that I have less time than at Christmas. But in the midst of all that busyness, volunteering only 6 hours a year is like putting a $50.00 bill in the kettle. Plus, it’s fun to be in the middle of all the Christmas scurry and flurry – to make eye contact with people, have pleasant conversations with strangers, and who knows? – you might even get to visit with a friend or daughter dropping by to bring you a cup of Starbucks!

This year many high school student groups, and community organizations, Four H, Cub Scouts, Rotary Club and individuals will volunteer to man the kettles, but they can always use a few more volunteers.

4 thoughts on “The Red Kettle”