When you saw the title of this post I bet you thought I was writing to brag about our NL West Champion Giants – or even the brand new American League Eastern Division Champion Orioles.

Both teams wear orange and black and both teams figure strongly into the Paladini family heritage.

No.  This is a different Orange Show.

We visited my sister, Monica, in Texas this summer, and she and her husband took us to Houston’s Orange Show.  With her tongue firmly in her cheek, Monica told us it was someplace she had always wanted to go.

Just for fun! (The word quirky comes to mind.)

My kindred-spirit sister and I dressed in orange for the occasion. Our husbands both rolled their eyes and shook their heads.  I think I heard John murmur the word, “Deranged…” 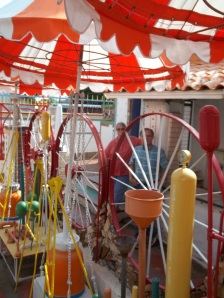 On YouTube we had seen an old film of the builder explaining his Orange Show project,  and that was enough for John and Mick.

The Orange Show was built by Jeff McKissack, a Houston mail man. It was 1956 when he got the idea, and began to work on this monument to the orange, a fruit he adored. The man was obsessed with oranges for their beauty and nutritional value. He purchased two lots adjoining his own yard at 2401 Munger Street, and proceeded to build…

He said he got the idea from seeing buildings he saw being razed as he walked his mail route. “Roof tiles from the Old Capital Theater, a fire escape at Stowers Furniture, and a miniature of the San   Jacinto Monument at The State Hotel”

The Orange Show is hard to explain. It’s a garish display of concrete, and tons of brightly painted scrap metal welded together. There’s a lot of tile work décor – borders, signs, and slogans. (And we noticed that spelling was not his strong suit.) McKissack was a busy man. His Orange Show covers at least two lots in the quiet neighborhood where he lived. It has multiple levels with decks, balconies and catwalks which are reached by a variety of metal stairways.

I wonder what the neighbors thought.

When we arrived the place was pretty much deserted and we weren’t sure what to do. But moments later a lady, apparently the caretaker, walked out of the house across the street and took our admission – a dollar each. She invited us to go on in and explore and have fun. Then she went back into her house and we were on our own to wander and wonder.

A sign tells visitors that “Anticipation of opening day was the fuel that
propelled McKissack to complete The Orange Show. He told people that he figured 80 to 90% of the people in the country would want to see The Orange Show.  Of course not all of them would be able to come, but he expected 300,000 or so a year.”

It opened on May 9th 1079 and 150 people came. McKissack himself conducted tours, and described future plans, explaining the use of steam in parts of his display, demonstrating the mechanical parts, and explaining the history and the symbolism of the exhibit. He said, “The show is built around historical events like the wheel. I have 85 of them, all sizes up to five feet in diameter…some of the wheels are over 100 years old.”

The Orange Show didn’t live up to Jeff McKissack’s expectations, but every part of it reflects his enthusiasm and optimism. We did not get the impression that he was disappointed in his life’s work.

Since 1980, when Jeff McKissack died, The Orange Show has evolved into a non-profit organization called Orange Show Center for Visionary Art.  Art patrons in Houston keep foundation alive, and provide programming for children and adults that includes music, storytelling and hands-on workshops.  Jeff McKissack would be proud. 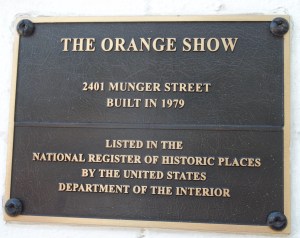 2 thoughts on “The Orange Show”