We left Modesto on May 6, 1990. We were heading across the country on our DP AirGometer – a fancy new stationary bike that worked the arms and shoulders as well as the legs.  We started east on Highway 132, making our way slowly across the AAA road map.

Every day we jotted down how many miles we went, and every few weeks we added them up and marked them on the map. (This was before the days of Map Quest and other mileage calculating web sites.) I had copied the map’s scale of miles onto a twisty tie (from a loaf of bread). Using it as a flexible little mileage calculator, we followed the curves of the road up through Yosemite and beyond.  John had a red line and I had a yellow. We challenged and encouraged each other, and pretty much stayed together.

When we reached the California-Nevada border we got a Nevada map, and then the following year we got a map of Utah.  Sometimes, just for fun, we did research on the cities and places we traveled through. We often talked about following our route as a road trip one day in real life. 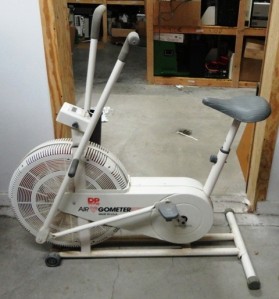 Then, somewhere in Utah in 1995 John had back surgery. Real life. After he recovered we decided to exchange the AirGometer for a regular treadmill. We also decided to start averaging both of our miles and travel together in a single line. 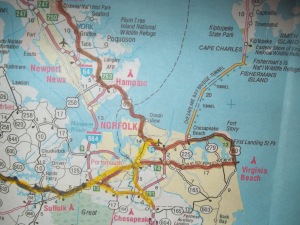 Finally, after 20 years we reached our first destination – The Atlantic Coast!  On our map, and in our mind, we triumphantly arrived in Virginia Beach, home of John’s brother, Mark and his sweet family.

We gave them virtual greetings, but wished we could have stopped by for a visit in real life!

By this time we had 10 road maps – one on top of the other – all stapled to the wall near the treadmill. 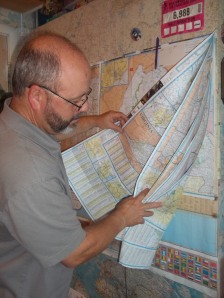 Where do we go from here?  I tried to convince John that it was time to have a swimming pool put in the back yard so we could swim laps…across the ocean.  (He just gave me “the look”)

Instead we decided to head north and walk around the perimeter of theUnited States.

We still jot down the miles, add them together, and chart them on the map; but the twisty tie has been replaced by WalkJogRun, a site where I can measure the miles on my computer and then put them on the map.

Since our arrival on the East Coast, we’ve walked north along the beach when there was a beach road. We walk along the highway when it runs near the coast.  We have almost reached another goal. Today we stand at Whiting Bay, the most eastern edge of Maine. (There must be a lighthouse around here somewhere…) 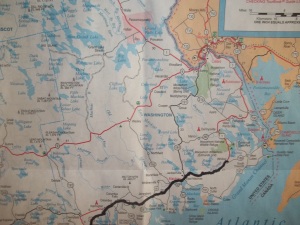 Habakkuk 2:2 says “Write the vision and make it plain on tablets, that he may run who reads it.”  (Okay, so we’re making it plain on maps instead of tablets.)

It may be silly, but each goal we come to really feels like an accomplishment. Our imaginary destinations have created tangible victories, and encouraged us to keep on walking. We’ve walked thousands of miles.  Someone has said “Success is not a destination. It’s a journey.” So now we’re getting ready to journey inland, up along the Maine-Canada border, to the farthest northern corner of our country. Who knows what adventures await!

One thought on “The Great American Treadmill Trek”