The chicken feet took me by surprise.  I didn’t expect them to look so much like…well…chicken feet.  But there they were, resting in their little dish of sauce, just waiting to jump onto a chopstick!

Otherwise the restaurant was lovely.  Elegant hangings and crisp white table cloths. Dan and Karen were waiting for us, and had already ordered a pot of good strong Chinese tea and a pot of hibiscus brew.  Karen had explained to me a couple of weeks ago that dim sum is kind of synonymous with the ceremony of taking tea. 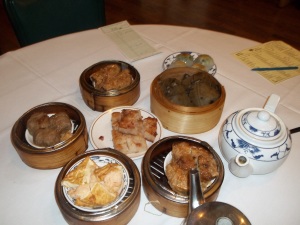 She was right. An article on dim sum said “Who hasn’t spent a lazy afternoon in their favorite Chinese restaurant, sipping tea and feasting on the innumerable assortment of delicacies that make up Chinese dim sum? Literally meaning ‘to touch your heart’, dim sum consists of a variety of dumplings, steamed dishes and other goodies.”

Well it sure touched my heart! One of John and my favorite things to do when we go out to eat anywhere is to order a bunch of appetizers instead of a regular meal.  So this was right up our alley.

We sat at the table and servers walked by pushing carts loaded with small dishes of savory goodies in little bamboo baskets. You are supposed to look at the cart and make choices, or  wait for the next cart that might have other choices.  I can tell you it was a sensory overload for me! Everything looked delicious although I couldn’t exactly tell what anything was. Karen was a whiz though. She has obviously done this hundreds of times.

She explained that you don’t eat the lotus leaves which are wrapped around the sweet rice. She told us the shark fin is not usually real shark fin these days. And thankfully she didn’t recommend the beef tripe with ginger sauce.

The server puts a tally sheet at the edge of the table and each time you choose a dish from the cart they mark it on the sheet, so they can tally the bill at the end of the meal.  Karen told us when she was a little girl they left the empty dishes piled on the edge of the table and they would tally the bill by counting the dishes.  Different shaped dishes had different prices.

We had turnip cake, pork buns, lotus leaf sweet rice, sharks fin and shrimp dumpling, stuffed mushroom with shrimp, and more things I can’t even remember. We laughed as we tried to figure out how to cut things into smaller pieces with chopsticks, and how to use our chopsticks to gracefully eat those little chicken feet one knuckle at a time.

A Wikipedia article explains the history of dim sum like this. “Rural farmers, exhausted after working hard in the fields, would go to teahouses for a relaxing afternoon of tea.

At first, it was considered inappropriate to combine tea with food, because people believed it would lead to excessive weight gain. People later discovered that tea can aid in digestion, so teahouse owners began adding various snacks.

The unique culinary art of dim sum originated with the Cantonese in southern China, who over the centuries transformed yum cha from a relaxing respite to a loud and happy dining experience.”

And that’s exactly what we had – a delicious, loud and happy dining experience! Thank you Dan and Karen.