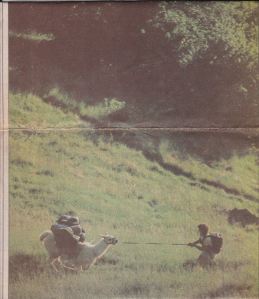 Newspaper photo of Robin and a llama on the opening hike of the Ohlone Trail, May 15, 1987

Robin’s dad laid out the Ohlone Wilderness Trail 25 years ago, and a very young Robin – along with my friend Emily and her llamas – were part of the group that made the first hike to open it.  So you can imagine that I was thrilled to be part of The Fellowship of the Four  who planned an “anniversary hike” on the trail this spring!

Robin, who is now a biology teacher in Southern California, was excited to return to her roots and hike in the land of her childhood.  Emily and Kathy have llamas, and looked forward to the hike as a training experience for one of their new young animals. I just felt privileged to be included for any reason.

At the ranger station, on the morning we began our trek, Robin was as giddy as a little girl! She and her family used to live here…and she played in that creek…and the old green barn hadn’t changed a bit (except now it was a visitors’ center, which happened to be closed that day) We walked along the water looking for the remnants of an old bridge. Robin told us about sitting and watching out the window of the ranger station as a violent storm washed the bridge away years ago. 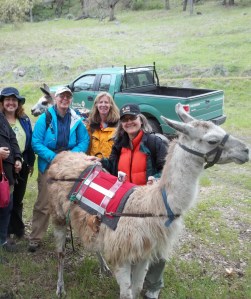 left to right: Robin, Emily, Kathy and Andrena at the trailhead with "Josh"

Her dad, David Lewton, was Park Ranger for The East Bay Regional Park District, and the family made their home in a rustic cabin, deep in the park.  They didn’t have electricity, and although they had running water in the house, they didn’t have a flush toilet. Her mom cooked on a wood stove, or sometimes with propane gas.It was the life they chose, and Robin says that even as a child, she knew she had benefits that could never be purchased with such modern amenities as electricity or television.

She told us about going to school each day in the modern world, and then returning home to her adventurous real life in the wilderness park.

She said sometimes she spent the night with friends in town, and their lives seemed sort of flat. It was never really dark because there were always street lights, and little lights on the appliances in the home.  It was never really completely quiet.  And when she woke up in the morning it was always the same temperature – never hot and never cold. It was nice enough, she admitted, but just sort of flat.

I think the Lord must have been grinning during the weeks we were planning our trip.  We set it up for Easter break since Robin is a teacher. We’d had a remarkably mild, dry winter and spring, and we felt confident that the lovely weather would continue.  Little did we know that our three day hike would be during the biggest rain and wind and hail storm to hit California this year.  It would definitely not be a flat adventure!  (To be continued.)