When I make a mistake in the kitchen I’m usually sort of cavalier – I try to turn it into something else. (“Oops…ha ha…meant to do that!”)  The overdone roast miraculously becomes a tasty beef stew.  The fallen chocolate cake is cut up into chewy – very chewy – brownies.  And so on… 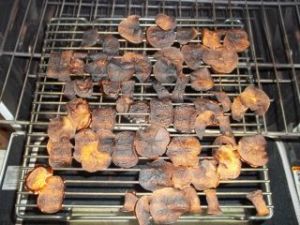 But sometimes there are kitchen catastrophes that can’t be salvaged. Serious hopeless disasters that make me laugh unless I’m crying too hard.

Today as I was pondering a subject for my 100th post on the Paladini Potpie, I decided to talk about some of my greatest Kitchen Catastrophes.

I’m not even going to dwell on how many times I’ve turned the oven on to preheat, and forgot to check inside. 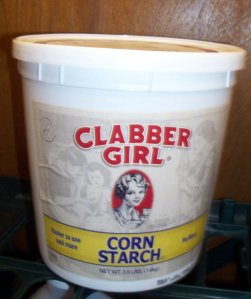 Along with these lovely Persimmon CRISPS I accidentally made not too long ago, my most recent boo-boo was when I decided to make cornbread to go with my ham and lima bean soup.

I don’t make cornbread very often, so I followed the recipe carefully.

I served it to my faithful friends who come to bible study, and like the kind women they are, they didn’t choke and spew or spit it out.  And to be honest, it didn’t taste too bad; it was just very heavy and chewy.

The next day as I was putting something in my pantry I happened to notice the label of what I had thought was baking powder.  Baking powder is the secret ingredient that would have made the cornbread light and fluffy; but what I had used was Clabber Girl cornstarch.  I’m so familiar with that picture of the cute little Clabber Girl on the baking powder container that I hadn’t even read the label.  No wonder the cornbread was so…um…starchy!

My most memorable food goof-up was many years ago when I was hosting a big group of ladies for a fancy Christmas potluck at my house. As the hostess I would have a lot of things to do in the morning, so I decided to make my salad the afternoon before.

It was a new recipe – a big mixed lettuce salad with chunks of grilled chicken, sweet pickles and grapes. But it wasn’t the season for grapes, so I decided to use chunks of kiwi. They’re both green, right?

It looked lovely, and I happily covered it with plastic wrap and put it in the fridge.

The next day, with a houseful of women I pulled out my still-beautiful-looking salad.  I was going to toss it a little before setting it on the table. I’ll never forget lifting the salad tongs full of salad, and seeing slimy liquid dripping back down into the bowl. It was so gross!  The bottom of the salad was full of viscous liquid, and only the tiniest bits of chicken remained.

That was the day I learned that there is an enzyme in kiwi that can be used to tenderize meat. It had tenderized my chicken to nothing.

I’m glad that luncheon was a potluck because I couldn’t get that salad into the garbage fast enough! 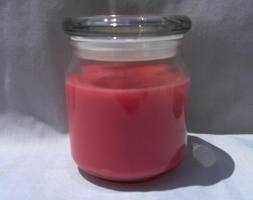 And finally, since we’re approaching candle season, I’m going to tell you about my worst kitchen catastrophe. And I’ll take a moment to thank God for his protection.

I love to burn those fragrant candles in jars, and when they burn out I melt the wax down and make new candles in the same jars.

I usually set the jar in a pan of water on the stove, and I usually keep an eye on it.

One day, though, I got distracted in another room and forgot the melting wax until I smelled smoke.  I ran into the kitchen to see that the water had evaporated and the jar in the pot was on fire.  It was just a merry little fire – and a lot of smoke.  Since there wasn’t much of a flame I was able to pick the pot up and carry it over and set it down in the sink.

I know better than this, but I wasn’t thinking.

I know you are supposed to smother oil or grease fires, or use a fire extinguisher like the one we have under our sink. But I was caught off guard because there was so much smoke and it was such a little tiny fire. It seemed like an easy thing to fix.

Our sink has one of those high arching taps with a sprayer, so I thought I could just extinguish the little flame by spraying it there in the sink. It was almost a reflex to spray water on it.

Never use water to put out a grease fire!

The instant the spray of water reached that little fire, the flames swooshed up higher than my head. To a truly monstrous height!  The wood cabinetry high above our sink caught fire, and the entire kitchen ceiling was blackened and blistered with scorched paint before I managed to smother the flames with a kitchen towel.

John was hunting that weekend and came home to a mostly smoke damaged kitchen, but he was very gracious and so grateful that it hadn’t been worse. Together we retextured and repainted, and when it was done, the kitchen was prettier than it had been before.

Grace – people who love me and who forgive my mistakes!

As we head into Christmas, I think of God who loves me and protects me and uses me in spite of my many mistakes. I thank him for all the times he has turned my foolish or careless mistakes into something good. Sometimes he used them to teach me something (kiwi is a good meat tenderizer). But sometimes he just dumps grace on my life and gives me something better than I could have expected – and certainly better than I deserve.

May He bless your Christmas Season!