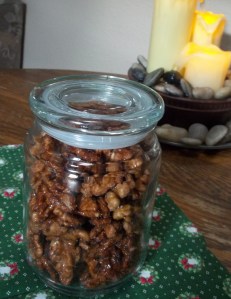 When my sister, Patti Ann, gave us a wok as a wedding gift 27 years ago, I don’t think any of us imagined that it would be used primarily to fry walnuts.  But yes, we have made over 200 pounds of what we call John’s Famous Super Secret Chinese Fried Walnuts!

It’s not really a super secret recipe, and it’s probably not really Chinese; but the walnuts are fried and they get more famous every year.

John and I give fancy jars of them to co-workers, friends, and family – and everybody just raves about them.  A couple of people even save their jars and return them for refills in early December the following year.

It’s a big job – I won’t kid you.  Last Saturday it took John and me five hours to make 18 pounds. Both of us were working together pretty much without stopping.

But it was so much fun!  We had the espresso machine going full blast, and Christmas music as loud as it would go. We were dancing in our hearts, but we refrained from actually dancing around our small kitchen, since there are pots of water boiling and a wok full of oil bubbling the entire time.

This is what you’ll need for one batch.

a large sauce pan (or two)

A big plastic bowl with a tight-fitting lid

You will also need several sheets of waxed paper

Bring 6 cups of water to a boil in the saucepan.

While the water is coming to a boil, lay long sheets of waxed paper on the table and measure out your four cups of nuts.

When the water is boiling, add the nuts.

Let the water return to a boil and then boil the nuts at a rolling boil for 5 minutes  Use a timer.

Meanwhile measure out your ½ cup of sugar and begin to let the oil heat in the wok.

After boiling 5 minutes drain the nuts in one of the colanders in the sink. Rinse them with hot running water and shake off excess water.

Dump the wet nuts from the colander into the big bowl. Add the sugar. Put on the lid and shake it well to coat the wet nuts with sugar. 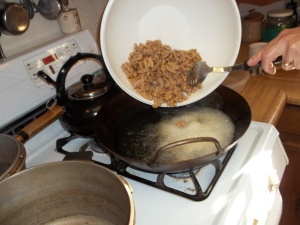 Carefully pour the wet, sugared nuts into the oil in the wok.  Be careful. If the oil is too hot or the nuts are too wet it will cause scary, excessive bubbling. We have never had it bubble over but we’ve come close a few times. 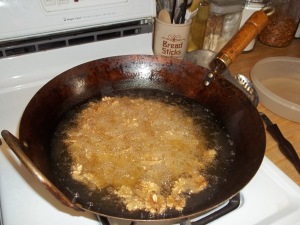 Deep fry the nuts for about 7 minutes till they are golden brown. Stir with a slotted spoon from time to time.

(If you are making more than one batch of nuts, you should be heating your next pot of water and measuring your next four cups of walnuts and sugar at this time.  You can use the same oil for as many as five batches, but then you’ll have to dump it out and put fresh oil in the wok.

When about 7 minutes has passed and your nuts are a dark golden brown, remove them with a slotted spoon to the other colander. It should be setting on the metal pie pan or plate to catch dripping oil.

Pour the fried walnuts onto the waxed paper and separate them immediately. They have a tendency to stick together as they cool.

Be imaginative and think of something fun to do as you allow the nuts to cool COMPLETELY on the waxed paper.