Butter Night has been a family tradition for more than 20 years. Every year we set aside a night to pour heavy whipping cream into quart jars and sit down to watch a movie while we shake the cream into butter.

You can read about how this tradition began in my last post, but today I’m going to tell you about the process of making butter.

1 tsp. salt (this is optional – but we are all salt fiends)

FYI – A half gallon of cream makes about a pound and a half of butter (6 sticks) and you’ll have about a quart of skim “buttermilk” left after the fat has been taken out of it.

Pour cream into the jars, so they’re no more than halfway filled.  The less cream you put in the jar, the easier and faster it will turn to butter.

Close the lid tightly and start shaking the jar.  That’s all there is to it.

Be sure to close the lid tightly.

Once, years ago, we had butter night at my friend Robyn’s. Robyn and I home-schooled our kids together so we decided to watch “Squanto” and make Thanksgiving butter.  I was engrossed in the movie when Robyn’s little girl, Amber, came over and handed me her jar.  “How is this coming along?” she asked.  I didn’t take my eyes from the TV, but I took the jar from her and gave it a shake…not noticing that she had taken the lid off!  The mess was everything you can imagine.

We usually check the progress by the sound of it, rather than how it looks. When you first begin to shake it there is a thick glugging sound. There comes a point when it stops making any noise because the cream has turned into thick whipped cream… You can stop here if you want, and bring out the pumpkin pie and skip the rest of the steps…

But if you choose to continue to butter, just keep on shaking.

It will really be hard to shake, and it will feel like nothing is happening.

Persevere through this stage and you will suddenly hear a “thunk” and a “slosh.”  That is your chunk of hard butter bumping around in thin sweet buttermilk. (This is not the sour cultured kind of buttermilk you buy at the store.)

At this point we pause the movie and take our jars into the kitchen.

We’re very silly about our “traditional roles” in this part of Butter Night.  One or more of us usually bursts out singing “Tradition” from Fiddler on the Roof. 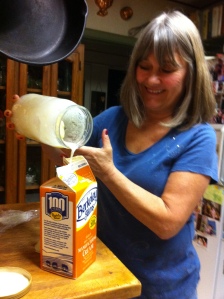 It’s the mama’s job to pour the buttermilk out of the jars and  into the original cream cartons to drink later. And then to plop the  chunks of butter into a big bowl of ice water in the kitchen sink.

It’s the papa’s job to squeeze the butter with his hands to get all the milk out of it.  Milk solids in the butter will cause it to spoil too quickly or become rancid. 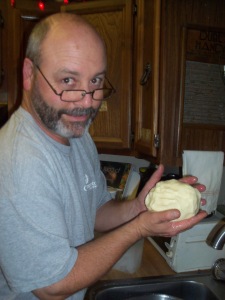 We have to change the ice water a couple of times until it remains clear when you squeeze the butter. 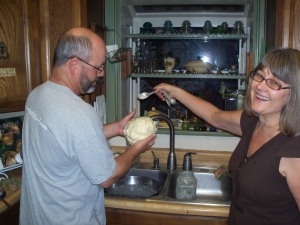 Then we salt the butter.  I sprinkle the salt and John mixes it in.  Even after 21 years we ask ourselves, “How much salt do we put in?” We joke that it’s a tradition to not remember how much salt we use.  For our taste it’s about 1 teaspoon for ½ gallon of cream. 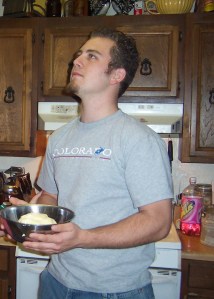 David’s “tradition” is to put the washed and salted butter into a smaller bowl and carry it from the sink to the counter.  He takes this job very seriously.  For many years he used the same red Tupperware bowl; and to this very day he carries bitterness in his heart because I threw it away.

Never mind that it had a big melted gouge on one side on the rim – it was his traditional butter-bowl!

We mold our butter in a little cast-iron muffin pan, but you can mold it in just about any kind of mold.  Or you can just let it harden in a little serving dish.

If you use a mold you’ll want to line it with plastic wrap so the butter doesn’t stick.

We take our little heart shaped butter patties “over the river and through the woods to Grandmother’s house” for our contribution to Thanksgiving dinner. The family loves it, and they dutifully assure us that home-made butter is so much better than store-bought.  I’m not sure it really tastes any better but it’s a lot more fun!