Throughout most of our kids’ growing up years we didn’t have television.  I like to think that’s part of the reason they grew up to be such bookworms. We liked to play games, but reading was our main family entertainment.

However…the kids sure made the most of TV when we went to visit friends or relatives!

And, I must confess, I found myself paying rapt attention to things like commercials with dancing raisins! (Important, fascinating things.) I remember thinking it was as much for my own good as for my children’s that we didn’t have a TV.  How easy it would be for me to get sucked into watching things I didn’t really care about!

There were some good programs for sure – but so much junk.  John and I agreed that, for the most part, TV was a time-waster; and not worth the time wasted.

Sometimes John said he wished we had a TV…so we could stop watching it and have more time.

Then the early eighties brought The VCR, and the whole new concept of being able to choose what to watch on a television set. Video stores began to open up around town.

Our firm resolve was a little shaken.

It would be fun to watch movies at home… I sort of vacillated on the whole idea. If we did have a television we could actually make choices about what to watch. We wouldn’t be limited to the networks and HBO.  But most of the time we really didn’t want one.

And then, one fateful day, a friend got a new TV and offered us his old set.  We were pretty excited, truth be told, but I insisted we keep it stored in the garage except when we were going to watch a movie. 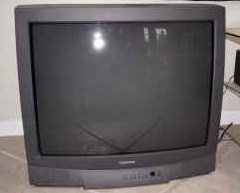 In those days, you could rent a VCR player at most video stores, so it was very easy to watch movies right in the comfort of your own home!

All we had to do was carry the eighty pound television set in from the garage, and find someplace to set it up; and then drive to the video store and rent VCR player and a movie.

It seemed as if the Paladini family was poised on the brink of high technology.  Oh how I resisted!  I wanted my children to keep their love of reading.

I wanted them to love old fashioned values…

Old fashioned!  I had a brain storm!

We could have a special yearly movie night, and make butter for our Thanksgiving dinner!  We could shake the cream in quart jars just like the first Pilgrims did. That way my children would learn how cream turns into butter, and we could watch a movie at the same time! (“And not be wasting time sitting vacantly in front of the boob tube!” I added self-righteously to myself.)