Maybe it’s because I’ve been spending time with my little grandson, Nathan.  I don’t know, but for some reason my mind seems to be drifting to nursery rhymes! A few days ago I talked about Peter Piper and today I’m going to talk about Pease Porridge.

I don’t know if anyone would actually like it cold, but it the Elizabethan England it may have been kept simmering on the back of the fire for nine days. It was served and served again, and then replenished with additional water or peas or bits of other leftover food scraps.

And John has not stopped raving about it since I served it to him the following day…when it was one day old.

It’s so easy to make I’m almost embarrassed to call it a recipe, but here goes! 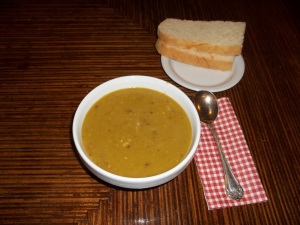 (Packaged cooked and crumbled bacon works great, but sometimes I use a few thick slices of ham or a ham hock. If you are using ham or a ham hock, put it in at the very beginning of the cooking process. This gives the meat plenty of time to get nice and tender.)

Salt and pepper to taste 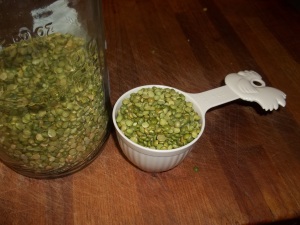 Bring the water and 4 cups of peas to a boil in a very large soup pot.

Chop the onions and add them to the pot.

Return to a boil and simmer at a medium boil for about 2 hours, until the peas are getting tender and the consistency is fairly smooth.

Stir with a wooden spoon every 20 or 30 minutes, scraping the bottom of the pot.

Add the other 2 cups of dried peas and the crumbled bacon .

Lower the heat and continue to simmer on low for about 2 more hours, stirring from time to time.

Add water if necessary, however, the thing that makes this particular soup so good is the thickness.

I don’t recommend that you leave it in the pot nine days, but you can certainly freeze the leftover soup and it will be as delicious as ever! 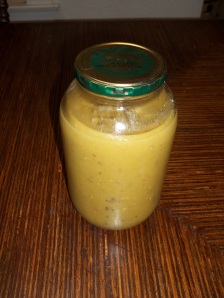