This was a dismal year for our garden.  Not one single eggplant…and just one forlorn cucumber. Only three or four zucchini, although we did have a fair smattering of tomatoes.

But the peppers!  Oh did we have peppers! Peter Piper would have been proud!

A few days ago I went out there, and I think I had probably picked more than a peck of peppers…when I began to wonder about something.

How did he do it?

If Peter Piper picked a peck of pickled peppers,

How did Peter Piper pick peppers that were already pickled?

I had to pickle my peppers after I picked them – and even though it was pretty easy, if I ever meet Peter Piper I’m going to ask him for his labor-saving secret.

And then I’ll pass it on to you.

But for now, this is how I did it. 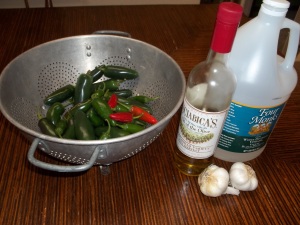 About 30-36 red and green jalapeño peppers

5 or 6 pint canning jars with new seals and rings.

You will need a “canning pot” that’s big enough to hold the filled jars of peppers in order to “process” them. 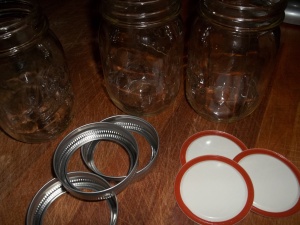 Put vinegar, water, salt, oil into a saucepan to make the brine. Bring it to a boil. Then lower the heat and simmer for 20 minutes.

Fill the canning pot about half-way with water and begin to bring it to a boil.

Meantime, wash the peppers, and using the tip of a sharp paring knife, put 2 small slits in each of them.

Wash the jars and fill them with hot water. This warms the glass so it doesn’t break when you pour in the boiling brine. (Pour the water out before you put the peppers in the jars.)

Pack the peppers in jars and add 2 or 3 of the garlic gloves to each.

Ladle brine over the peppers in the jars. Fill them to about ½” from top.

(I use a wide mouth canning funnel so I won’t spill the oily brine on the edge of the jar.)

Close the jars with seals and rings and place them in the hot water of your canning pot. Make sure the jars are covered with hot water.

Bring this “hot water bath” to a boil and lower the heat to medium.  Process for 10 minutes.

Carefully pour off some of the water so you are able to lift the jars out onto a towel on the counter. 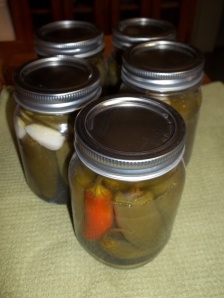 As the jars cool you’ll hear the ping of each jar sealing, and you can be so excited to know that your pickled peppers will be preserved and yummy for months and months.

One thought on “Paladini Pickled Peppers”