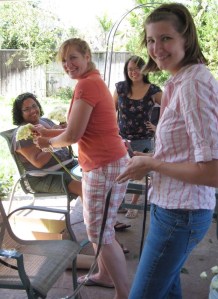 Dora was everywhere – handing out lists and barking out orders and keeping everyone in line.  Dora is our son’s mother-in-law and she took on the role of wedding coordinator for Monica’s wedding.

I was telling my friend Kimi about her a few weeks before the wedding. Kimi  is a professional wedding coordinator in the Bay Area, and I was grateful that she let me pick her brain when I saw her at church each Sunday.

I had never seriously thought a wedding coordinator was necessary. I had actually sort of laughed at the idea.  I thought it was somewhat “affected” and I couldn’t get Jennifer Lopez out of my mind. You might need a coordinator for a really rich fancy wedding, but not a somewhat simple, small affair as ours would be…

Boy, was I wrong!

As the day approached and details began to pile up, my admiration for Dora grew. And I began to understand how much of a real job it is to be a professional like Kimi.

Now, do you know what your most important duty is during the ceremony?” she asked me one day.

I had no idea. It was all a bit of a journey into the unknown.

“As Mother-of-the-Bride, it’s your job to stand up when Monica and John start to walk down the aisle,” Kimi explained.  “It’s very important. You need to tell Dora that, if she doesn’t already know. When the mother of the bride stands up it’s a signal for everybody to stand up and turn to see the bride.”

Well who knew???  Actually a few people in our brain-storming, planning meeting did know that; and Dora was glad to put it into her file of “stuff a wedding coordinator should know”.

She’s thinking of doing wedding coordinating as a business now, and we’re all encouraging her to do so. But no amount of money could buy the friendship and love she added to the natural talent and drive she brought to Monica’s special day.

I was supposed to stand, and then people would stand with me.

…So many people stood with me.

It’s now been two weeks since the wedding.  It has all begun to settle in my mind and I’m leisurely reliving the memories. I’m humbled at the scope of help and support our family received as I walked through the day in a dreamy, dazed “Emotional Mother mode”.

So many people “stood with me” and I’m thankful.

It would take far more space than this blog to say thank you to the many people who helped us and worked hard to make Monica and Dan’s wedding “the wedding of their dreams”. We are so grateful to all of you.

I almost  hesitate to mention names because I’ll probably forget someone, but how can I not say thank you to Sandy and Roger?  As John says, “We could not have done it without them.”  While Dora was “front and center” managing and coordinating, Roger and Sandy moved busily and quietly in the background…serving and serving and serving. Sandy probably used two tanks of gas shuttling people to and from the hotel to the house to the rose garden.

Thank you for standing with us!

So many people stood with us in quiet, unseen, loving “background” ways.  We could not have done it without you.

Thank you to my sister, Monica. (I knew there was a reason I wanted to name my daughter after you!)

My sister-in-law, Tracy.  My brother, Brian. And Hannah. Kori, Denise and Doug, Rick and Judi.  Thank you.

Thank you for standing with us.