I was startled when John suddenly began to pull the car to the side of the freeway as we were driving to church this morning.  I had been reading to him and I looked up in surprise, “What’s wrong?”

“I’m being pulled over.” 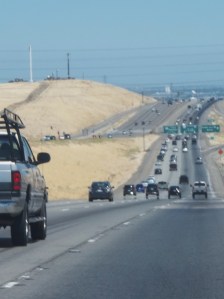 Just last night we had barely avoided a serious collision when a speeding car changed lanes abruptly, and forced John to brake very quickly and pull part-way into the next lane.  As we watched the offending car speed blithely out of sight we were shaken and enraged – “Where are the police when someone does something stupid like that?”

Now we knew where the police were.

The CHP officer was ever so slowly approaching my passenger side window.

We had been driving in the fast lane and come upon a pocket of cars following one slowly moving vehicle, traveling along at about 59 mph.  John had pulled into the right lane to get ahead of them, and apparently was so enthralled with what I had been reading that he forgot to decelerate.

I rolled the window down.

“Good morning, sir. The reason I stopped you, is that you were speeding. Were you aware of that, sir?

John made a peaceful, non-argumentative gesture, and admitted that he really had not been aware of his speed.

“And where are you going this morning, in such a hurry?” This time he looked from one of us to the other, so I took the opportunity to answer.

“We’re going to church and he’s a pastor.”

The officer took a step back and smiled with an exaggerated grimace. “Ohhhh.  I really hate to give you a ticket.  But I clocked you back there at 80 mph and the speed limit is 65. I really can’t let you go. May I see you driver’s license, registration and proof of insurance?”

“I understand.” John nodded, as he handed his license to the officer and I fished through the glove compartment for the other papers.

“So…a pastor’s wife.  How’s that?” he asked me conversationally.

Having gathered our papers, he started to go back to his car and then he returned to the window.  “I can’t let you go, but I’m going to write it for  less so it won’t be such a big fine.”

The officer went back to his car and John and I glanced at each other.  Ouch. This was not going to be good.  Just yesterday we had decided on a certain amount of money to start a tax-deferred educational savings account for our grandson, Nathan.   Fines are no fun in any amount,  and this speeding ticket sounded like it was going to be expensive.

The officer returned to the window. “I can’t do it,” he said.  “I mean, you’re the man. You’re going to church and you help people…”

We listened in disbelief.

“This is a strange thing to ask you,” the officer continued, “but maybe it’s not.  Have you ever seen a White Buddhist Monk?”

We shook our heads. We had not.

“Well, you’re looking at one.”

He looked like the most normal, stereotypical CHP officer you could imagine.  But he went on to explain that he had gone to Tibet, and shaved his head and studied Buddhism – that he was actually a White Buddhist Monk.

We made some kind of show of interested acknowledgement, still stunned that he wasn’t going to give us a ticket.

“Now, how are you going to talk about this today?” He asked John with a grin.

John laughed and shook his head, a little at loss for what to say. “Thank you,” he said simply and sincerely.

“Be sure to tell people there are consequences to breaking the law,” the officer advised.

“So I guess we won’t talk too much about grace?” I ventured.

“You know, grace.  We broke the law and we didn’t get a ticket.”

“Oh no!” he laughed. “Tell them about grace. Let them know that we’re not all bad guys. But now, you’re really cutting into my ticket count.”

His eyes were already scanning the passing traffic as he gave us a few instructions about how to safely re-enter the freeway. Then he smiled and stepped back from the car and waved goodbye.