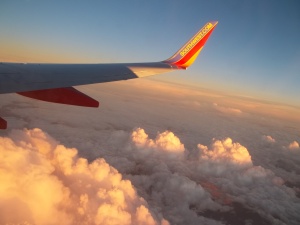 Our connection in Phoenix must have been one of the fastest in history.  Literally five minutes from being aboard one plane and then being aboard the other. We were the last two people to get on the plane.

I had been hopeful that our “A” numbered boarding passes would score a certain window seat, but now as the airline employee hurried us down the empty ramp I only hoped that John and I would be able to get seats together!

Clutching our belongings in front of us, we carefully edged our way down the aisle of the very full plane. We dodged elbows, and smiled or averted our eyes from the curious, sometimes sympathetic (but sometimes irritated ) faces of seated passengers.  (“For crying out loud, why can’t people get to the airport on time?”)

Every seat seemed to have been claimed.

And then – halfway between the wing and the back of the plane were two seats next to a man seated on the aisle.  (Score!)  He smiled a welcome and quickly picked up several piles of paperwork he was working on, and had spread across the empty seats beside him.

Tom is a man of Italian descent.  He’s a native of the Baltimore area, a frequent business traveler, and was a very congenial seatmate! He treated us to a glass of wine and we spent most of the flight in animated conversation. We chatted about raising kids, the Baltimore area, the work we do, religion, our mutual Catholic roots, and the Lord. It was absolutely delightful!

“We’re just about over Mount Airy  now.” Tom indicated sparse lights below us.  We would soon be landing in Baltimore, only to turn  around and drive back to the area we were now flying over. We joked about “Too bad we can’t just parachute out and be at our destination…”

Detours and delays…it’s human nature to gripe about them.  I don’t know where we would have chosen to sit if we had arrived at the Phoenix Airport on time, and entered the plane as part of the first group of passengers holding the coveted  “A” boarding passes. But I think the Lord put dibs for us on those two seats.  He has a way of orchestrating those so-called delays and detours to bring about surprising blessings.