I have some chai here, if you’d like to try a sample…” John and I were strolling through the Modesto Farmers’ Market when the man spoke to us in a quiet,almost diffident voice. We had been kind of caught up in the color and clamor and energy of the Farmers’ Market, and when we turned to see who had spoken it felt like we were looking into an island of peace. 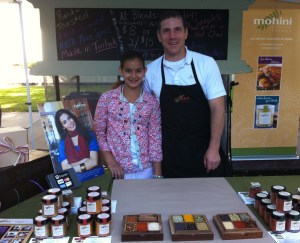 It was a spice booth – Mohini Indian Fusions. The owner, Rex Rabine, was pouring a cup of chai from a steaming urn. “Be careful,” he warned us, “it’s hot.” It was hot, and it was delicious – absolutely the most delicious chai tea we had ever tasted! As we stood sipping the tea, Rex told us how he prepared it, and he showed us which of their many spice blends he used to make it

I like my food spicy. And when I say “spicy” I usually mean “throw in lots of habañeros or jalapeños.” I think most people are like that – when we think about spiciness, the first thing that comes to mind is hotness. But as Rex showed us all the different spice combinations, and explained how they work together, I realized it has everything to do with taste – not heat.

We bought a jar of their poultry blend, which we sampled the minute we got home. It contained 12 different spices and no salt. And nothing with heat. As John and I stood in our kitchen tasting tiny fingerfuls of the spice blend, it felt a little bit like wine tasting. (A little bit.) We would concentrate, and try to isolate and identify the different flavor of each spice listed on the label. John commented that it is really an art to know how to blend the various flavors to make the single unique taste.

Mohini has lots of different jars of spice blends and few (if any) include hot peppers or chili. They do sell a jar of “Spicy Pepper Blend” to add heat to whatever spice you’re using. Or you can add your own dried or fresh chili pepper. 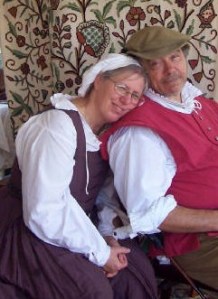 As Rex was telling us about the origin of some of the spices, and how they are used, it occurred to me to tell him about my friend Emily. Emily Cotton is a popular speaker at schools and Renaissance workshops. She bills herself as a Renaissance Storyteller and Scribe, and one of her most well-attended classes is Pirate Sails and Caravan Trails. Wearing a period costume, and drawing on enthusiastic audience participation, Emily gives out tons of fascinating information about spice trade during the time of the Renaissance.

Thinking of spice trade, it’s fun to see how different culinary cultures are opening up and becoming linked today. I’m half Irish and half Lithuanian, but my bulvinial blynai (potato pancakes) have acquired a distinctly Italian flavor since I have married into the Paladini family. And since I’ve become an honorary Italian, I’ve pretty much mastered the art of Italian cooking. Garlic, basil and fennel figure prominently into most of the things I cook. And now in recent years, a new spice route has opened up for me as I’ve begun to haunt our local Middle-Eastern Market and make regular stops at the Afghan food booth at the Farmers’ Market.

Back to Mohini: I think Rex is like me – he married ethnicity. There’s nothing Indian about him, but he’s an expert on all those spices of The Far East. His exotically beautiful young daughter looked a lot like the lovely woman, Mohini, whose picture stood on the counter. We commented on it, and he smiled proudly, “My wife will be joining us in about an hour with some food samples,” he told us. (“Hmmm…we just might have to walk back down here in an hour.” I was thinking.)