“Uncle Will!” Sarah cried. “I can’t believe it’s you! After all these years. You’re here too!” Tears flooded her eyes and softly cascaded down her cheeks.

“My goodness, girl, you’re the spittin’ image of your mother! I would have known you anywhere! Those enchanting green eyes run rampant in the Tucker women. And I guess I know firsthand the charms you Tucker women possess!”

“Well, Uncle Will, I’ve definitely got Tucker blood, but I’d like to believe that I’ve got some of my father’s looks and traits too. I guess you can understand, after being married to my Aunt Leona for so many years, how I dread any inherited traits from that Tucker woman!” Sarah was busy trying to wipe her tears away with the back of her hand. She smiled as she did so, because she was beginning to feel that now was the perfect time for repairing broken family ties. Surely her uncle wouldn’t be hugging her if he held anything against her.

“Hey, let’s sit down! I’m hungry as an ox! We can catch up as we eat.” Sarah’s Uncle Will maneuvered the two of them back to the table he had been sitting at. “I’ve already ordered. Here, let’s get a menu for you.” He waved to the waitress, who seemed to be on quite familiar terms with her uncle. “Sue, could you bring a menu for my niece, Sarah – Sarah Kent.” After the waitress exchanged pleasantries with Sarah and took her order, the two long lost relatives looked at each other and began to speak simultaneously. “I’m sorry. You go first.” The always polite uncle offered.

“Well I really don’t know where to start,” Sarah hesitated, “I’m at a point of my life where I need some answers. I really need to know who I am and why my life ended up being such a roller coaster ride. I came back here to Hillbrook to search. Search for grandma and my father’s family. I’ve got to make some sense out of my life, Uncle Will. I need to know who I am and who I want to be. I hate to be melodramatic, and hopefully I don’t sound like some lost soul to you…”

As her uncle sincerely shook his head, Sarah continued. “I drove out to Grandma Rose’s old farmhouse. I don’t know what I expected, but I was horrified when I saw Agnes come to the door. I never thought in a million years that she would be living in Grandma’s house! Of all people! Agnes. I know now that she was the cause of so much pain and wrongdoing. Why is she there?”

“That’s a long story,” began Will, “Apparently, when your grandmother moved away she left her house and property with a neighbor to manage. She told him she would return in a few years and he could keep whatever rental money the place brought in. In return, he would make sure it was properly maintained and let out. Your grandmother never told anyone where she was going and no one was ever able to find her whereabouts after the neighbor died. The property was turned over to the courts, and your Aunt Leona was given the deed to it after the seven year waiting period. Now this all happened while you were living with us. I think your grandmother was so heartsick after Leona took you away that she just went away herself. Well then, since she was never heard from or found during those seven years, the house was Leona’s to do with as she pleased. So of course Agnes moved in. Gossip has it that Leona gave it to her, but I happen to know that’s not true.”

Her Uncle Will paused briefly while he decided whether or not he wanted to explain his feelings. He took a deep breath and continued. I was a little hopeful that Leona might move back to Hillbrook and live in the old home place. I don’t know if you can understand this, Sarah, but I still love Leona. Even with all her selfishness and lack of integrity, I love that woman. I made a commitment to love and care for her through good times and hard times. I meant that.” After a long pause he added, “I don’t believe she would have ever turned against me if it hadn’t been for Agnes’ meddling. Agnes seemed to have some hold on your Aunt Leona, Sarah. Somehow I think it has something to do with something that happened when they were kids. Still, I love her.”

“I’m sorry, Uncle,” Sarah interrupted, “but I can’t understand that. I never want to see my aunt Leona again. This morning when I was standing there in front of the farmhouse, I realized how much my grandmother meant to me. Aunt Leona, through her constant slanders, turned my heart against Grandma Rose. For too, too many years I believed the lies that Leona and Agnes fed me about my grandmother. What would Grandma think about the way I turned out? It was Sarah’s turn for a silent pause. Her facial expression revealed to her uncle that she was hurting and struggling against painful memories that he could only guess at.

“Here, I am thirty-one years old,” thought Sarah, “What kind of person have I become, Grandma? I’m afraid you’d be awfully unhappy with the wildness of my life. I’m like that morning glory vine you talked about. I guess you’d say I needed some cutting and pruning to put my life back on the right.”

Uncle Will brought Sarah back to the present. “You know, darlin’, I never once thought you meant those hateful words you said to me that day I was forced to leave.”

“Oh Uncle, I was tricked into saying those things. Agnes convinced me that you and Leona would get back together if I made you feel sorry for taking sides with me. I was a pawn in her hand! She knew just how to manipulate all of us. I didn’t mean a word I said to you that awful day. You can’t imagine how many times I have wished I could take those words back. I was afraid you’d never understand or forgive me for them.

Her uncle’s face slowly spread into a warm smile. I felt like a father to you for those few short years we lived together. I knew how you were being torn apart after you were taken from your grandmother when you were nine. You must have heard your aunt and I quarrel about who you were best off with. I pleaded with her to send you back to Rose…only problem was, by then we couldn’t find her. And I loved you.”

“You were a father to me, the only one I ever knew.” Sarah was beaming at the man across the table in a way that felt so right. The feeling this provoked in Will was one that all men are born to desire – he had wanted to protect and nurture her when she was young, and now, even though she had matured into a woman, he still wanted to protect and defend her. He had never had children of his own and yet God had provided this little girl for him to love and father.

“You and Grandma were the only ones I knew, without a doubt, truly loved me. With both of you I felt safe and secure.” Sarah’s tears began to flow once again. This time, however, she didn’t think she’d ever be able to stop them.

Her uncle slid into the seat next to her and put his arm around her. “It’s okay, honey. It’s going to be okay.”

Back in the motel room, Sarah changed into the nightgown she had packed. She was exhausted! Emotionally drained. Who would have known it was going to be such a day?! After many minutes of splashing cold water onto her tear stained face, she tiredly made her way to the motel bed and crawled under the covers. She shivered from the coldness and the strangeness of the sheets that she drew up over her. She lay there going over the events of the day. The peace she had hoped to capture by coming back to Hillbrook still eluded her, but the accidental reuniting with her uncle was the beginning of a healing process. And the healing felt good.

Still she couldn’t accept the fact that Will loved Leona after all she had put him through. What had he said? “I made a commitment to love and care for her.” A commitment…what did that really mean? Would Jonathan keep such a commitment if she turned out to be an unlovable wife? She might not even know how to be a good wife.

So many questions still to be answered. On the top of the list in Sarah’s heart was ‘Where did you go, Grandma?’

She rose from the bed and dug through her suitcase, retrieved the small black bible, and promised herself that she’d start reading it tomorrow. Surely some of Grandma’s love had originated from this book. Who knows what she might gain from the book that her grandmother seemed to build her life on. It was worth a try. As she drifted off to sleep she was repeating softly in her mind, “I need you, Grandma…I need you…” 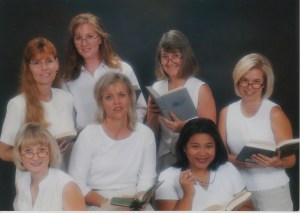 If you’re new to “Paladini Potpie” or haven’t visited in awhile you might want to read about Jane Jardscg and how this Novel Adventure came to be.