I was in a sociology class at Modesto Junior College, and our assignment was to find someone whose family had immigrated to America, –  to interview them, their parents and grandparents, and then write a paper on the Americanization of the family.  (What luck that I had just met that cute Italian guy at the singles’ party!)

Are you Italian? I asked John – just to open up the conversation. “Yes,” he nodded, smiling.

“Are you full-blooded Italian?”

“Yes.”  His eyes were still twinkling, but he was giving me a quizzical look.

I explained my assignment and asked if I could interview his family.

(Now when John talks about this today he tells people he was my science project.  And to tell the truth, in the months to come we did spend a fair amount of time sitting together in a science lab teaching four rats to press the bar in a Skinner box.  But that may be a story for another day.)

None of John’s family lived in Modesto, but he said he’d be glad to take me to meet them.

We drove to Novato, in Marin County to meet Grandpa Guido and Aunt Anna. I learned that Guido and his wife Gelsomina came to America from Lucca, Italy in 1924, bringing their three-year-old little girl, Anna. And I was told that Guido’s brothers, Cherubino, Nello and Primo also immigrated here around the same time. 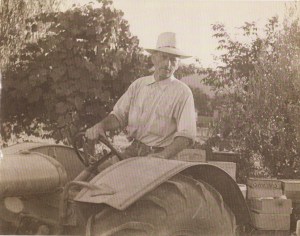 Boy, was I excited! Guido, Nello, Primo, Cherubino, Gelsomina, Anna… You don’t get much more Italian than that!  My project was off to a flying start!

The following week we drove about 100 miles north toWoodland to meet John’s parents and interview them. I was pleasantly surprised that he was so willing to help me, and apparently so interested in my project!

I felt a little awkward, though, when I saw that John’s mother had prepared a wonderful fancy dinner, and when she remarked more than once that she was so pleased to meet John’s friend and to see her son so happy.

But I had to acknowledge that the Woodland Paladinis were the nicest family I ever spent an evening with.

I learned that Guido had three sons after he came to America. He named them Franco, Louis and Georgio, and they later Americanized their names to Frank, Louie and George.  Frank named  his own sons John, Mark and Ray. This family seemed “made to order” for my sociology project.

Little did I know, as I set out on those long drives, armed with my trusty cassette tape recorder and list of questions, that I was  conducting interviews with the wonderful people who would become my new family within a year.